Mayor Ginther Returns Home for the State of the City Address 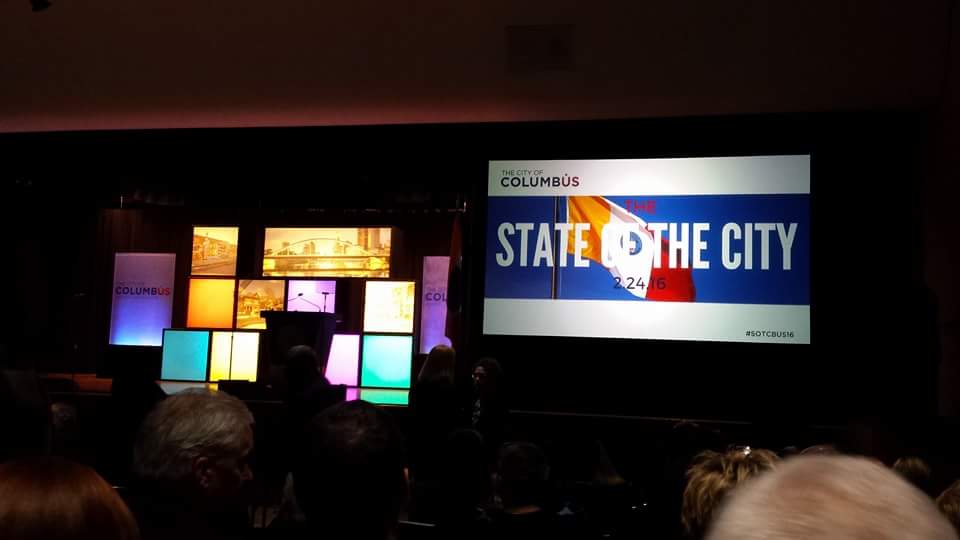 The state of the city was nothing less than a success. The large, upbeat crowd created a lively atmosphere. The elite leaders of the city of Columbus were all in attendance, including the Buckeye Guy, NBC 4, 10tv news, and ABC 6 were in the building getting as much coverage as possible on the new mayor’s State of the City address..

The Whetstone auditorium got a face lift for the event.  It was filled with colorful lights and cameras were scattered everywhere. The night started off with the National Anthem sung by Whetstone’s very own mixed ensemble, followed by the pledge by two Dominion Middle School students.

Ms. Janet Routzong, Principal of Whetstone High School gave the audience a hearty, cheerful greeting welcoming them into the home of the Braves. This was proceeded by senior, Akeem Adesiji”s introduction of the mayor, which included facts about 1993.  Akeem mentioned how gas prices were lower, Beanie Babies still existed, and that also happened to be the year Mayor Andrew Ginther graduated from Whetstone High School.

Mayor Ginther is the 53rd mayor of the City of Columbus and is ready to make a change and start acting on his words.

The mayor touched on numerous topics while addressing many of Columbus’s important needs. Ginther stated that the City of Columbus is growing faster than any other metropolitan community in the United States.

Mayor Ginther strongly addressed neighborhoods where families are struggling and how their challenges must be taken into consideration. Along with that Mayor Ginther made it known that the young must be provided with a number of opportunities including early education experiences, particularly in the Linden neighborhood.

Another topic Mayor Ginther emphasized was infant mortality. Ginther’s mission is to continue saving young lives and to cut the infant mortality rate by 40% with the help of the Celebrate One organization.

“We are making a difference but we will not be satisfied until every child has an opportunity to celebrate their first birthday,” Mayor Ginther said.

Many people thought this event was great and had an awesome turnout, including Ohio State student and Department of Social Change Coordinator at Ohio State, Davonti Haynes. “It was a really good event and very informative about what’s happened within our community and what

Mayor Ginther is planning to do to further improve the City of Columbus. Especially his work within the Linden and Hilltop communities,” Davonti Hayes said.

Students from Whetstone including Akeem Adesiji, who are planning the Just Columbus Festival with the help of OSU’s Department of Social Change were present handing out flyers to bring awareness to the event.  The Just Columbus Festival hopes to bring attention to many of the issues that the mayor plans to address early in his term including infant mortality, poverty, and police-citizen relationships.  The event will be held on Saturday, April 16th at Jennings Hall on the OSU campus and is free to attend.  There will be speakers, food trucks, and musicians.
With the initiatives Mayor Ginther has in place, we should hope to see improvements in the City of Columbus in the future.

This site uses Akismet to reduce spam. Learn how your comment data is processed.